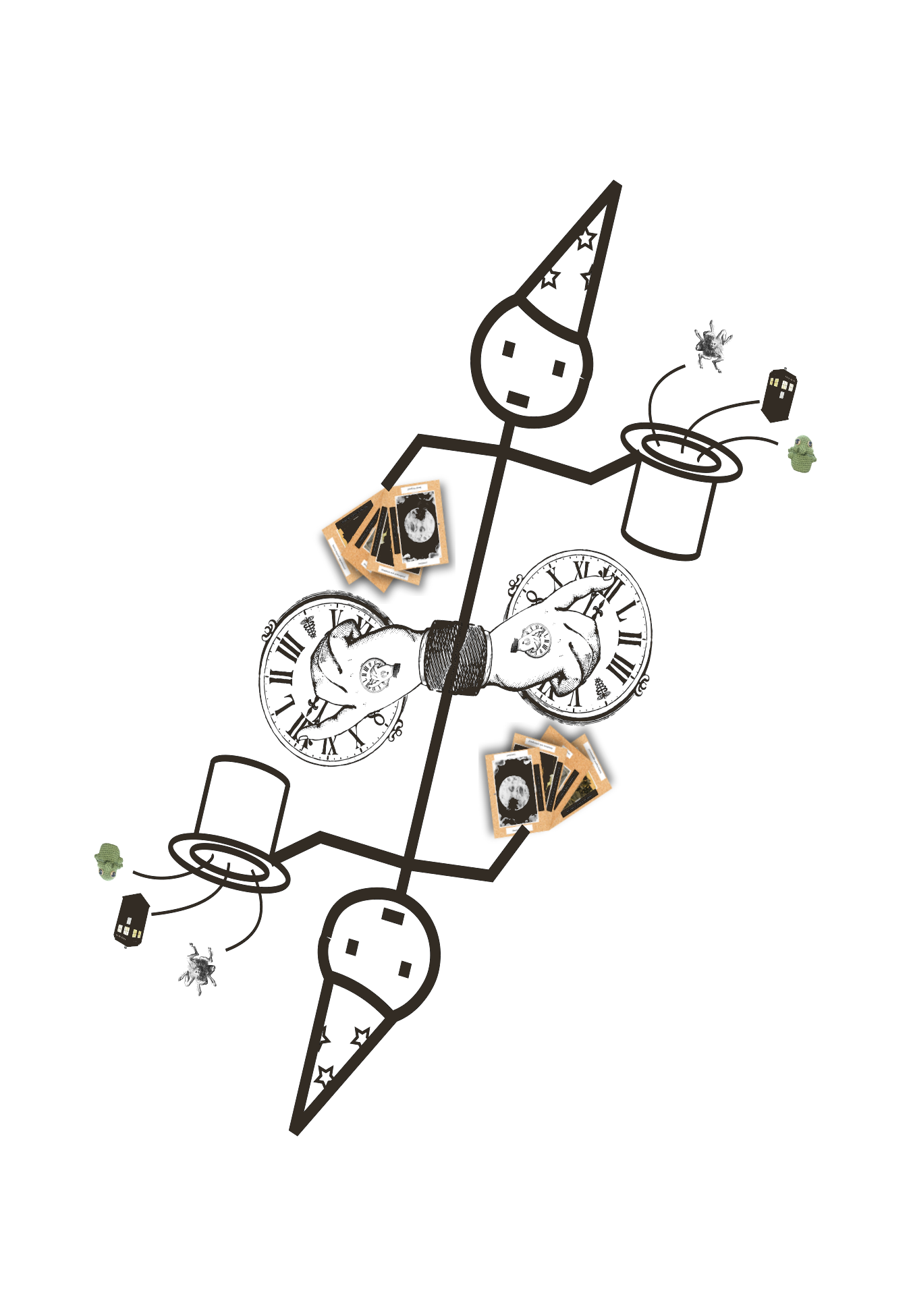 The Space·Time Deck is a deck of 67 cards and a few blanks, loosely inspired from Tarot decks, and designed to aid with story improv, including Role-Playing Games and other forms of Storytelling.

Each of the cards is designed to be interpreted on its own, and to be used as part of a narrative role-playing ruleset. For both reasons, cards have both illustrations and symbols.

The Space·Time Deck is used throughout the Plotonomicon for building plots, characters, places, factions, twists, etc. and throughout the N-Dimensional Tourists as a base for resolving obstacles, conflicts, etc.

The first reason to use cards is that they are a natural support for improv.

In theory, in story improv, you should be able to use anything around you as support for improvisation, anything you see or hear or remember. In fact, the patron saint of improvisers is Usual Suspects‘ Keyser Söze, who manages to come up with a plot twist just by looking at his coffee cup.

Sadly, most of us aren’t Keyser Söze. We have ideas, many of them, all the time, but we typically have so many of them tha it’s hard for us to pick one, focus on it, and develop it until it actually becomes a good idea.

Looking at one card is one way to focus your thoughts, for just a few seconds, by forcing yourself to express your thoughts in relationship to this card. Focus helps you pick one single idea from the mass teeming in your brain, which is what you need to make that story interesting and fun!

The second reason for which we use cards is specific to gaming and resolving obstacles or conflicts.

Most role-playing games use dice for the purpose of resolving obstacles or conflicts, and dice, once rolled, have a very limited set of interpretations – typically only a number and a color. Using cards that support open-ended interpretations gives us much more freedom to build a story upon the workings of this resolution.

The Space·Time Deck consists in:

Each suit consists in:

The blanks are designed to be customized. Add your characters, places or factions or cosmic powers of importance in your campaign, or anything that you believe matters, as and when you see fit.

If you have a professionally printed copy of the Space·Time Deck and plan to use the deck for several campaigns, you probably want to use unstickable stickers/sticky notes for customization. Or, simply, got to your local RPG shop and buy card protectors for all your cards, to make sure that they cannot be distinguished at first sight, then go ahead and print out custom cards.

Finally, for whenever you need to determine if a card somehow beats another one, there is a universal rule:

(if it doesn’t show up on the diagram, it’s a stalemate)

Each card consists in:

Note that the Suit symbol or the Figure symbol may be in complete contradition with the Illustration, Title or Interpretations – or related only by the thinest of threads, possibly just a joke. If you are familiar with Tarot, you may find this surprising. Don’t worry, this is by design: cards are there to provide starting blocks for improv, and to fit in open-ended stories with multiple narratives, not to force players into a single interpretation.

Cards are good at helping you come up with answers to specific questions:

Once you have a question, draw one card – orientation matters.

Question: “Who will the Syndicate send after the heroes?”

If the heroes do not have any such character in their backstory, it’s ok – backstories are highly malleable, so it is high time to ask one of them if they would please tell us more about their past love relationship with The Sphinx.

There are, of course, other ways to interpret the card, and that’s entirely ok. Just pick one!

Question: “What do the heroes find on the way to the Temple of Unlimited Horror?”

So, here we go: in the course of the weeks that it takes them to travel to the Temple, the heroes find a trail of dead or dying dragon and dragon-like creatures, good and evil alike. They have all been hunted down by a young, irresponsible nobleman and his personal guard. This is the kind of action that will have bad, very bad consequences for the future of the entire kingdom. Also, in a more immediate matter, the personal guard of the nobleman is on the path of the heroes, and is going to prevent the heroes from progressing.

What kind of bad consequences will the slaughter have? How are the personal guards going to cause problems for the heroes? Well, that sounds like questions for more cards!

This work is licensed under a Creative Commons Attribution-ShareAlike 4.0 International License.