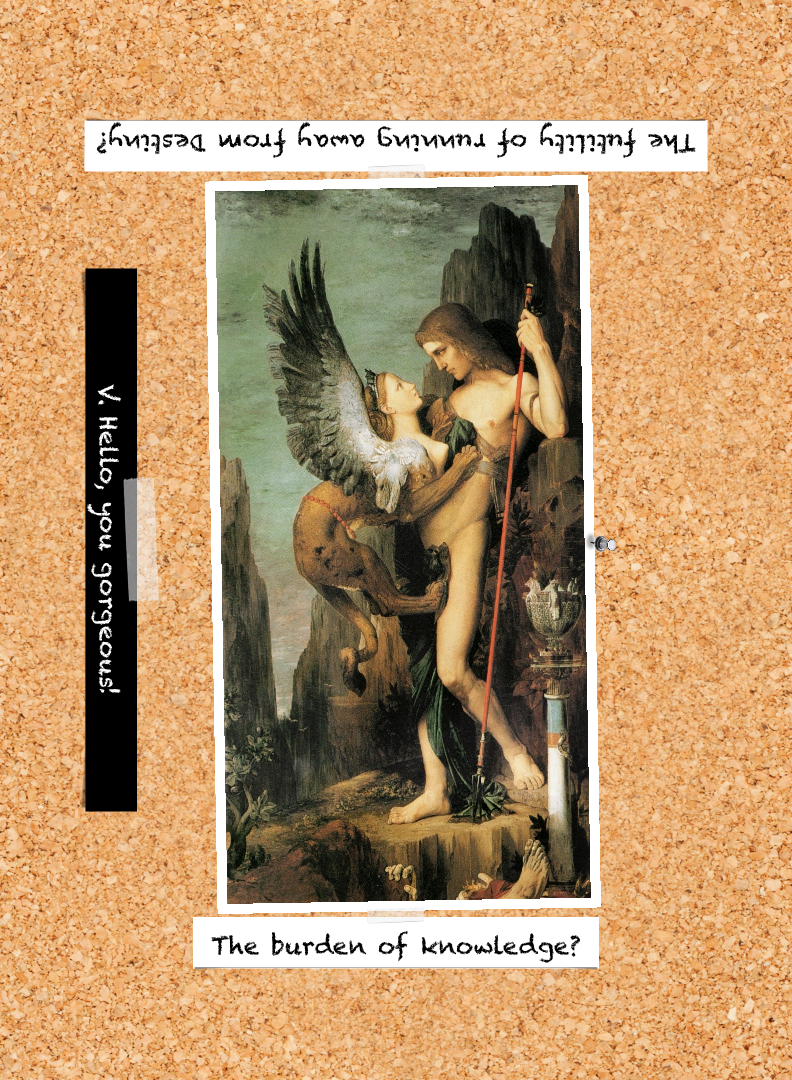 This is an extract from the Plotonomicon.

Note that we have just changed the picture from

The old picture (The Slaughter of the Innocents) one was considered too violent – while both are museum pieces, the first one depicts mass murder of children, and was thus discarded as not-safe-for-children’s-hands.

This new version gets rid of almost all violence, and offers much more symbolism, hence much more freedom of improv.

This picture depicts Oedipus and the Sphinx of Thebes facing – or perhaps embracing – each other. In Greek Mythology, Oedipus is the son of Queen Jocasta and King Laius of Thebes. Before Oedipus’ birth, it was prophecized that he would murder his father and marry his own mother. To avoid the fulfilling of this prophecy, Oedipus’ parents had him wounded at birth and abandoned to die in the wilderness. Of course, Oedipus survived and was adopted by loving parents – the Queen and King of Corinth. When, as a young adult, Oedipus eventually learnt of the prophecy, not knowing that he had been adopted, he fled his home to, once again, forestall the prophecy. Oedipus ended up meeting and killing King Laius, his real father, defeating the Sphinx of Thebes, and, as savior of Thebes, marrying the recently widowed Queen Jocasta. This unknowingly incestuous marriage cursed the city of Thebes, but it is only years later that Queen Jocasta and King Oedipus realized, after a series of coincidences and revelations, that they were mother and son. In shame, Jocasta killed herself, and Oedipus blinded himself, walking the roads as a blind beggar. Just to make sure that this story couldn’t have any kind of happy ending, their children continued the curse - life was hard in Ancient Greek Myths.

As for the Sphinx, she was a guardian of sorts, who choked and ate whoever could not answer her riddles, until she met a man who could, at which point she killed herself. In a later version of the story, she actually gave Oedipus the answer to the riddle, because that was her only way out this role of evil monster.

The fight between a hero and a monster, or a dance of seduction, or two arrogant figures, or a woman, more forward than what society expects, and a younger man, surprised. Also, a desolate landscape, the only entrance to a mysterious city. Also, a guardian of secrets, willing to shed her charge. Also, a blundering teenager, surprised by a question or a secret whispered and about to be trapped into power. Also, the clinging hand of a victim not fully dead yet.

The burden of knowledge

Information, but an information that comes with a cost. Maybe the cost is upfront and visible, and the heroes will have to meet it to get the information. More likely, this information comes with a responsibility that the characters should not have wanted, perhaps in the form of a choice to make, or a long-ignored debt to own. Perhaps it is time for a character to learn of a bastard they have sired, or a child thought dead, or a lover or a friend or a mentor in hardship. Perhaps it is time for the heroes to make a choice where no option is acceptable.

The futility of running away from Destiny

If something was hunting down the heroes, or perhaps their antagonists, that something has arrived, or at least a good reason to believe that it cannot be escaped. Perhaps a countdown had started for some doomsday clock? Doomsday has arrived while the characters were looking away. Maybe a prophecy was under way, or a paradox? In either case, it is time to tie the knot. Or maybe it is something less scary that cannot be escaped anymore, something like love, or a conversation that needs to happen now, even in the middle of a dungeon. Or maybe it is time for a character to realize their role in the story and perhaps even to accept it – a hero may be born, or a villain.

Example: Going beyond the enemy lines

World War 2 in Europe. The sarge and his men have been tasked with a secret mission. They have spent two days half-lost beyond the enemy lines, and have finally just reached the hill behind Château Maniais. They only have a few hours before the Obersturmführer escapes towards Berlin. The sarge looks at the Château from his goggles. What does he see?

A group of random strangers has awakened in a deadly shifting maze, in which they must band together to survive. Or not. Why were they put in the labyrinth?

Example: What does the Alchemist want?

The heroes need the expertise of an alchemist to identify the Stone of Power that they managed to trick away from the Lord of Wind Castle. As it turns out, there is only one alchemist of renoun in the region, and she serves in the Temple of the All-seeing. What does she want?

This work is licensed under a Creative Commons Attribution-ShareAlike 4.0 International License.